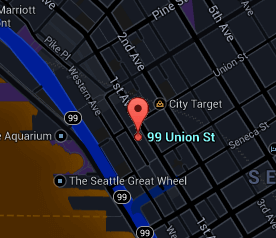 Seattle has over 90 unique neighborhoods. The location of Four Seasons is in the area known as West Edge.

The Private Residences of Four Seasons is located on First Ave. & Union Street, in the heart of downtown Seattle. Just one block south of Pike Place Market, the building is close to theaters, sports stadiums, galleries, restaurants, and a myriad of shopping venues. The choices of activities are numerous, allowing residents in the area to enjoy a carefree and spontaneous lifestyle. Every building has its own personality and attributes. The community is an important aspect of city living and can have an impact on how integrated it is with the residences. The Four Seasons building features can be explored here. A full list of amenities within the complex is displayed to help understand the offerings of the project. All active, contingent, pending, and sold listings for the Four Seasons building.

Get email updates for Four Seasons

The Stroupe Group specializes in downtown Seattle condominiums. All the articles that have been published by the Stroupe Group concerning Four Seasons and West Edge can be found here.

Four Seasons: Back on Course Thanks to a Seattle investor group led by Jolene and Bruce McCaw, The Four Seasons Hotel and Private Residences is back on firm long-term financial

More and more new construction projects have been slashing prices and looking to unload any remaining inventory as quickly as possible.

The grand opening of the Four Seasons boasts a host of appealing amenities.

We crashed the Grand Opening today for the Four Seasons today, and mixed in with those invited from the media.

Downtown to be Heated by Waste Wood

The Seattle Steam Company, located just west of the Four Seasons off Western Avenue, will be heating approximately half of Seattle with wood.

Friday was perfect for visiting the new Four Seasons & Private Residences. We took some amazing photos while we were touring.

Wondering what the western facing side of the Four Seasons is looking like ?

Taking on the position of Executive Chef, Chef Kerry Sear (owner of Cascadia Restaurant in Belltown), will also take on the responsibility of the To disassemble the tower crane, general contractor Lease Crutcher Lewis stationed one of the West Coast’s largest mobile cranes to the

Known around the globe for it’s dedication to continuous innovation and high standards in hospitality, Seattle’s Four Seasons Hotel and